Malcolm and Marilyn Leggett have long recognized the importance that the Vaccine and Infectious Disease Organization (VIDO), a world-class research facility at the University of Saskatchewan, has on the local community.

As they have done repeatedly, they supported a project in their own backyard with a vision to promote the significance of a local organization on the global stage.

The long-time Saskatoon residents have known for some time about VIDO, especially during the COVID-19 pandemic. So, when they recently donated $1 million to VIDO, they knew their support would go a long way to helping others, not just locally, but wherever vaccines are needed.

“There is no question we believe this is great thing that is happening right here,” said Malcolm. “VIDO is good for our community, it becomes ours. This is a facility for the people in Saskatoon, in Saskatchewan and in Canada.”

Malcolm is the co-founder of NSC Minerals, a Saskatoon-based provider of salt for de-icing, industrial and agricultural applications, which was started in 1988 and serves Western Canada and western United States. In May 2014, Malcolm stepped down as president and CEO and was executive chair of the board of NSC Minerals until the fall of 2016 when he retired.

The far-reaching global research being conducted at VIDO is something that caught the Leggetts’ attention.

‘Category on its own’

“I think this is far bigger than one vaccine. This is a whole different category on its own,” Malcolm explained. “It’s got the potential to be so rewarding. I don’t really think we can visualize what the potential is for something like VIDO.”

The Leggetts have lived in Saskatoon for decades and have quietly contributed financially to many civic organizations spanning health care to the arts and sporting communities. The gift to VIDO is the largest they have ever given.

The couple, who has been married for 51 years, acknowledges they have been blessed in their lives and it’s important to give where they can.

“You don’t own money. You only have the use of it. You will not be judged with what you have,  but what you do with it,” Malcolm said.

Marilyn was quick to point out that the COVID-19 vaccine research is just one part of what VIDO does. Just as important, she said, are the other efforts being made at VIDO such as protecting farm animals from potentially harmful diseases that can affect the global food chain.

“All of these areas of research have the ability to affect our food supply,” said Marilyn, who had a lengthy career as a teacher in Saskatoon’s Public Schools.

But, Marilyn added, there is more to it than just the research of vaccines.

‘Enhances the quality of life’

“When we have such facilities in Saskatchewan, we bring top research scientists from all over the world which adds to the culture in our city,” she said. “It enhances the quality of life in our own city.”

“We greatly appreciate this extraordinary donation from Marilyn and Malcolm,” said Dr. Volker Gerdts , VIDO director and CEO. “Knowing we have this level of support from leaders in our community is critical to our organization and our vision for the future.”

USask president Peter Stoicheff believes the Leggetts’ commitment to VIDO highlights the importance of the research on campus to the community at large.

“The Leggetts’ gift is a testament to the life-changing research being conducted on our campus that will undoubtedly enhance the lives of people around the world,” said Stoicheff.

Malcolm is hopeful that VIDO can do much more than being able to research vaccines, but it also needs to have the ability to manufacture them here in Saskatoon.

“I don’t think you can farm-out a vaccine. If you’re going to design a vaccine, develop a vaccine, then I think you need to have the ability to control the manufacture of it. You can’t rely on a third party.”

Construction is already underway at VIDO to build Canada’s only containment Level 3 capable biomanufacturing facility, one of a few in the world. Federal and provincial funding will ensure this facility will be built according to Good Manufacturing Practice specifications, a requirement for human vaccine production and animal vaccine production outside North America.

When construction and certification is complete, the facility will advance new vaccine development and contribute to domestic vaccine production for both humans and animals. With government funding and the support of donors to date, VIDO is one step closer to its vision of becoming Canada’s Centre for Pandemic Research and able to respond to future pandemic threats.

The Leggetts are hopeful that people in Saskatoon continue to have as much pride in our city and are still able to contribute, if not financially, but through providing their time and volunteering.

“It’s not the amount (you give),” said Marilyn. “If everybody gives according to their means, that’s what’s important.”

She also pointed out Saskatoon has carved out a reputation as “the city of volunteers,” a sentiment echoed by Malcolm.

“If you can’t necessarily give money, they give time, which is just as important in many ways.”

And rest assured, Malcolm says he and Marilyn will continue to support the city they proudly call home. 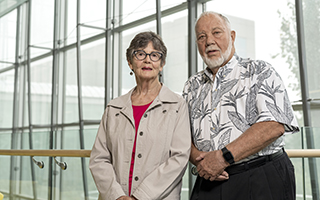